A Tune For Frank

The weekend of January 16th, 2016, I was called up to Dallas to visit my grandfather, a dementia patient because of a series of strokes he suffered the previous year. The nurses said he wasn't eating and was less verbal, which were both signs that he was nearing the end.

Although I can only recall a handful of times we met, I remember him always being supportive of my music. An inquisitive man, he would always ask about the programs I was using to notate my music, and he'd be amazed at the sound that could be produced from the snowglobe-sized speakers that sat on my desk.

January 21st, I hadn't written anything for awhile. I was in the middle of my morning practice routine when a melody caught my fingers and I couldn't help but follow it. I wrote it in a very short time, and not five minutes afterward my brother called. Frank had died.

Seemed obvious, then, what I had to name this song. 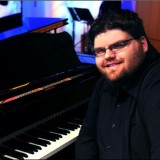 Comments will be approved before showing up.

I sat at my piano, one dark and rainy morning I turned my iphone on and I started playing. This is what came out (with a small bit of editing.)